Embroidery has been around almost as long as clothes themselves, with needlework believed to originate in the Orient and Middle East.

The oldest European embroideries in existence date back to the Anglo Saxon period, and include the 10th-century stole of St Cuthbert, embroidered in gold thread and currently in Durham Cathedral. The oldest extant European embroidery is a vestment fragment circa 850 at Maaseik in Belgium.

One of the greatest periods was 1250-1350, when ‘English work’, or opus anglicanum, was exported and admired all over Europe. This was viewed as an art form on a par with stained glass, sculpture and architecture.

Opus anglicanum was famed for its fine goldwork, used in expansive backgrounds, skillful use of underside couching and expressive spiral split stitch.

Coinciding with the height of English illuminated manuscripts, artists and manuscript illuminators were probably involved in the designs, mostly for church vestments and furnishings, including diplomatic gifts abroad. Few secular examples have survived.

The labour-intensive pieces, such as the Syon Cope in London's V&A Museum, were created by skilled craftsmen. Records show that women were skilled in the art too. These workshops paid modest wages, funded by merchants and noblemen who took the bulk of the profits.

Details from the Master's gown

Many masterpieces for the church were worked in silk and silver gilt thread, using pearls and precious stones, making some embroidered vestments hugely valuable. It is stated that a Company called the Tapissers or Tapestry Makers who were in existence in 1331, and mentioned by Chaucer in his Canterbury Tales, was absorbed by the Broderers’ Company. Unfortunately, most records describing the part they played in Middle Ages embroidery were destroyed by the Great Fire of 1666. What we do know is that price fixing was difficult thanks to competitors working privately outside the guilds, which included nuns, and that the Broderers helped settle disputes.

After the 1300s, the Black Death, wars and economic stresses combined to cause a decline in standards, while the Reformation reduced the demand for ecclesiastical works.

Embroidery in Tudor times became more confined to wealthier households, on court dress and home furnishings. Servants were often hired because of their skills with a needle. Popular designs included floral motifs with twining rose stems and other English flowers entangled with birds and butterflies. Many used expensive silk, which had to be imported from the Levant.

Aristocratic ladies hired master designers to make pieces, while they devoted themselves to their handiwork. Mary Queen of Scots is known to have studied in France and had two master designers. The Elisabethan period also saw two splendid silver cups given to the Broderers by two of their most significant members, John Parr and Edmund Harrison. 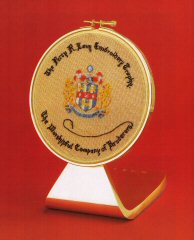 By the 1600s and 1700s, samples and pictures were in vogue and the craft was increasingly a domestic product. During Queen Anne’s reign, Robert Adam was designing patterns, though most were self-designed or customized to suit the purpose of the piece. But, thanks to expanding world trade and colonization, the growing middle class were able to afford more ready decorated imported textiles.

In 1906, 16 former students founded the Embroiderers’ Guild to promote the craft, educate the public and preserve fine works of historical and educational merit. It became a Registered Charity in 1964, during the handicrafts revival of the 1960s and 1970s when more embroidery patterns were produced commercially.