Our ancestors travelled west to find gold – in early March, the Broderer’s went east to discover a different sort of gold!! In the 1970’s the Mayfield Convent was closing and presented twelve very striking embroidered panels to the Royal School of Needlework on the understanding they would conserve and look after them. Each panel illustrated a different invocation of the Litany of Loreto – a Marian litany originally approved in 1587 by Pope Sixtus V and named after Loreto – the first place the litany was known to have been used.

When the panels were donated to the RSN, no-one knew who had designed the panels and even less about who stitched them. The RSN set to work and have since identified that an Italian, Ezio Anichini designed the panels. Anichini, born in 1886 went to art school in Florence in 1902 (at the age of 16!) and by 1905 was getting commissions. Between 1915 and 1920 he drew a sacred series of images, some of which are replicated in the embroidered Litany panels.

Information about who stitched the panels is still vague – possibly the nuns of the convent – but despite the pre-Raphaelite look of the panels, they are clearly a product of the 20th century. All twelve panels have only been on public display together once before but as part of the RSN’s 150th birthday celebrations they were on display at Ely Cathedral – a treat not to be missed and a key reason for the Broderer’s visit east. Our group was fortunate to include Broderer Liz Elvin, who wrote the text for the RSN catalogue of ecclesiastical embroidery. 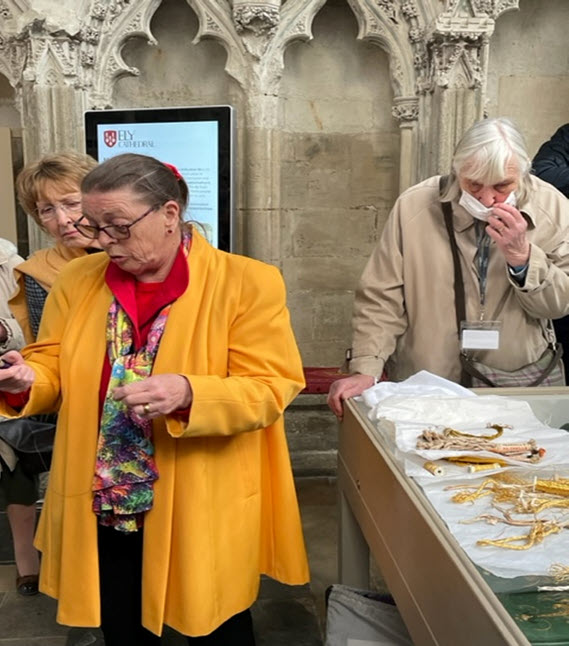 Broderer Liz Elvin with examples of the threads used in the panels as well as modern versions.
Liz also explained a little about the history of the panels and their life since being donated to the RSN

The volunteer embroiderers at Ely Cathedral who look after the vestments joined the Broderers as Liz explained the story of the panels and the skill involved in the stitching.
The Ely volunteers were generous and shared examples of their recent work, including a number of stoles stitched during Lockdown and a beautiful altar frontal that has required some serious restoration and conservation to avoid further damage. 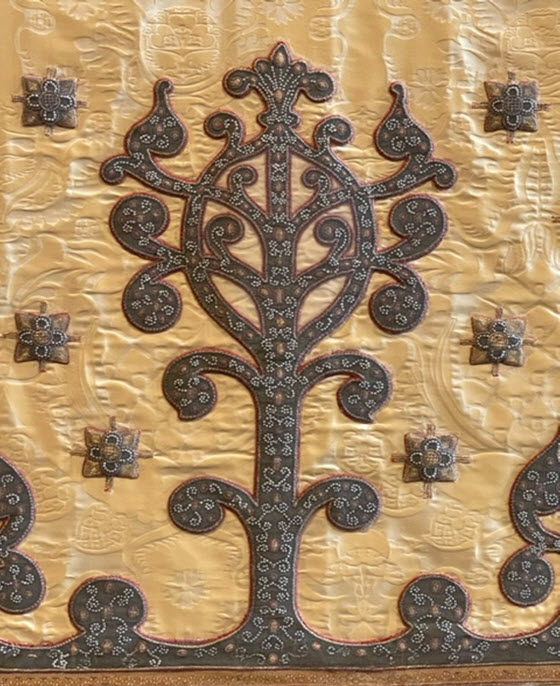 Detail from the Ely altar frontal. Conservation netting was applied over the whole frontal to catch any pearls and avoid further damage from shoes.

Our second day saw the Broderer’s visit the National Trust Conservation Studio., near Blicking, Norfolk. Not normally open to the public, the Studio is the first port of call for any NT textile that needs restoration or conservation.

Tapestries are a frequent workload of the Studio and the first step for any tapestry sent for attention is to be cleaned. Photographs of a tapestry before and after cleaning highlighted the impact of log fires, candles and many greasy hands over the years and that’s before the irrecoverable impact of light damage on threads! 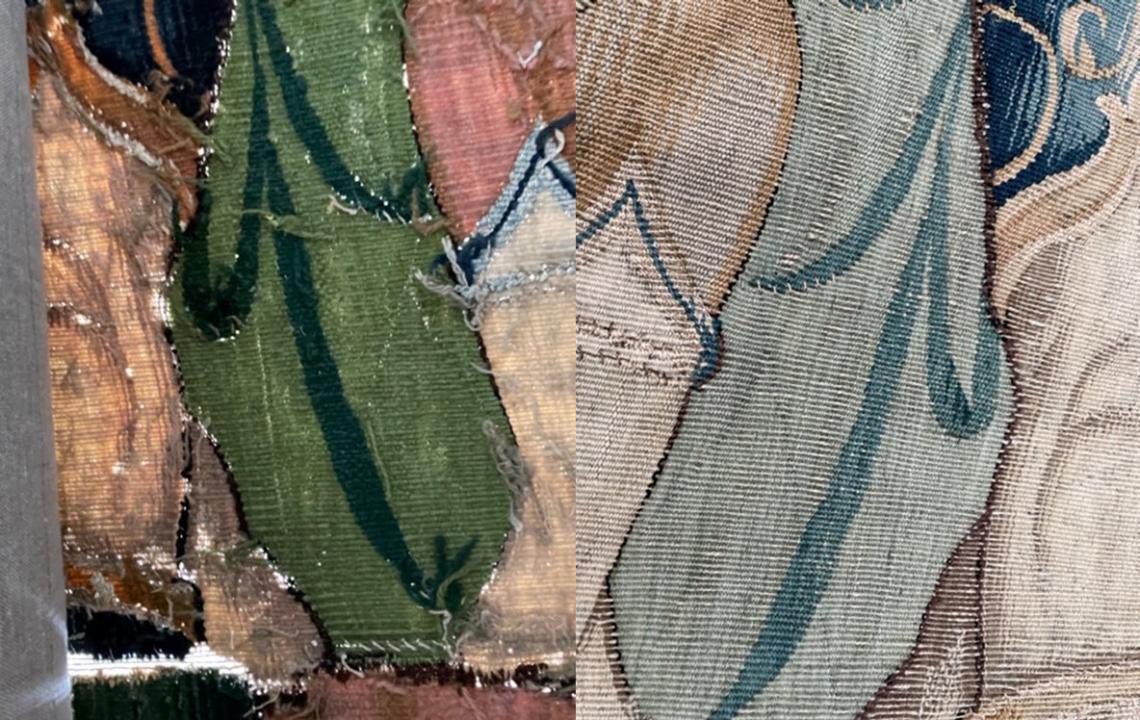 Detail of a tapestry reverse with almost no light damage and the same area from the front.

Studio staff showed examples of a Chinese silk bedspread restoration, a completed tapestry and a number of stage costumes worn by Ellen Terry. 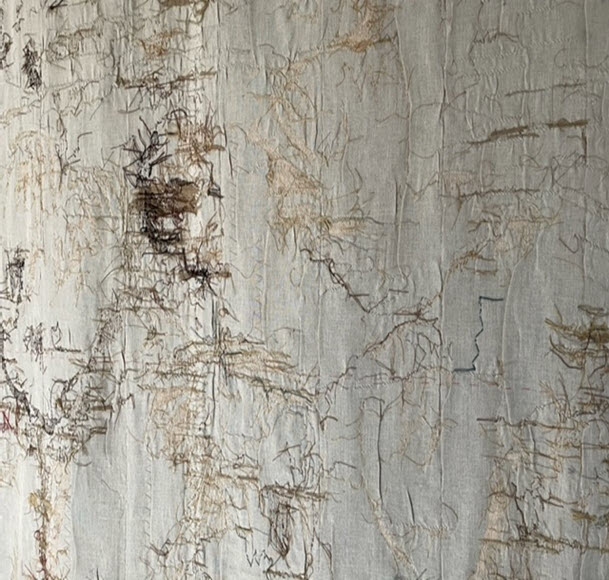 Detail of the reverse of a completed tapestry conservation project. A new linen backing adds strength to the fragile textile and the modern conservation stitching from 2022 can be clearly seen by all future conservers. 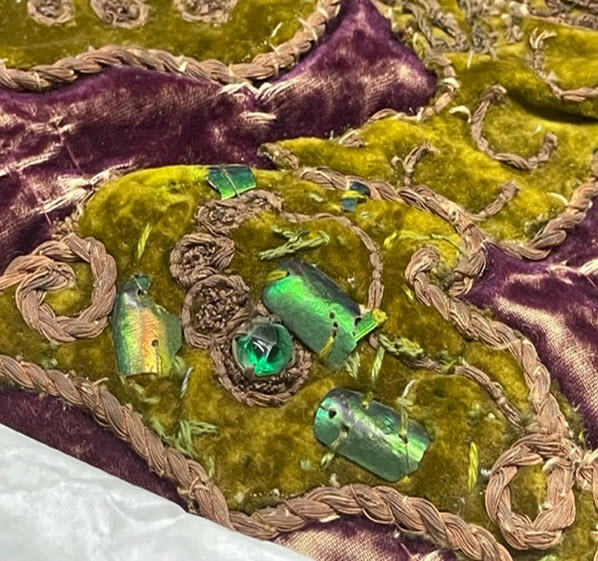 Detail from an Ellen Terry stage costume. The Victorian/Edwardian equivalent of sequins – beetle wings can be clearly see. 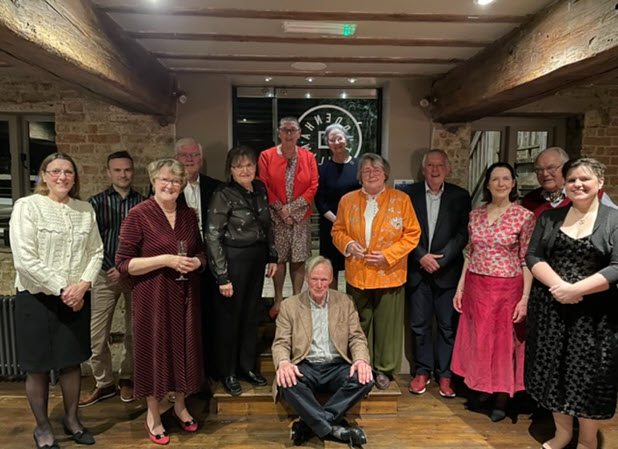 As ever there was fellowship and conviviality amongst the group, helped along with splendid food and wines.