Though the first hard evidence of their existence in the 13th century (or 14th! – see Plain Dealing Fellows book) has been destroyed by fires and bomb damage, the Broderers are thought to have been around a lot longer.

City functions used to take place at the Broderers’ Hall, originally part of a tenth century monastery at 36 Gutter Lane, off Cheapside, until it was destroyed by bombs in 1940. They are the only Livery Company to have their own Master’s Song, which the Master has to sing solo and seated at all dinners in reply to the Toast to the Company.

This is the official Broderers' Toast:
“The Worshipful Company of Broderers Root and Branch: May it continue and flourish for ever”.

The Broderers held their first embroidery exhibition in Mansion House’s Egyptian Hall in 1894, followed by a grander three-day show in the Mansion of the Royal School of Art Needlework, Kensington. There were 278 exhibitors and prizes awarded to a value of £240.

In 1982 the Court accepted the P.R.Levy Embroidery Trophy as a permanent prize for competition among Company Members, with entries judged by a panel appointed by the Royal School of Needlework. In recent years, the Competition has been widened to include all Freemen and Liverymen of the City of London, their spouses and their children. This trophy is still awarded every two years.

Unlike many other Livery Companies, few Broderers today are actual embroiderers, coming instead from all walks of life, but they continue to patronise the industry and encourage excellence. This is achieved by supporting crafts’ association the Embroiderers' Guild, backing the Apprentice Scheme at the Royal School of Needlework, today a registered charity housed in Hampton Court Palace, and continuing their competitions and exhibitions.

There are 107 Livery Companies ranked in order of seniority by the Court of Aldermen, initially in 1515, when there were 48 of which the Broderers was not one. That number reduced as a result of various mergers. However, many more Guilds were formed, received Royal Charters and became Livery Companies.

In 1837, the Court of Aldermen produced a revised list and on that the Broderers appeared as Number 48. New Companies are still being added to represent modern commerce and trades, their seniority being based on the date upon which they were granted letters patent by the Court of Aldermen. 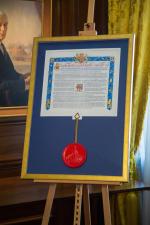 The Company was honoured to be granted a new supplemental Charter by HM The Queen, signed in Council on 19th March 2019.
This new Charter can be viewed via this link: Charter.pdf