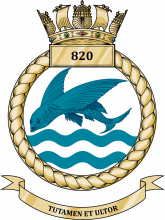 In 2015, the Broderers embarked on their first affiliation with the Royal Navy in the shape of 849 Naval Air Squadron (NAS) which was part of the Fleet Air Arm. 849 NAS had been an airborne early warning squadron since 1952, flying fixed winged Skyraiders and Gannets from the aircraft carriers until 1978, and airborne early warning Sea King helicopters from 1982 to 2018. Beginning its transition to operating Crowsnest, the Royal Navy’s new airborne early warning system, the Sea King was retired in favour of the Merlin Mk2 helicopter and in April 2020 849 NAS was subsumed as part of 820 NAS and the Broderers are now formally affiliated to 820 NAS.

820 NAS has an impressive pedigree. Originally formed before World War 2, it saw distinguished service during the war, including crippling the Bismark, and numerous operational deployments since including the Falkands in 1982, and . Now dedicated to the new carrier HMS Queen Elizabeth, 820 is an integral part of the Carrier Task Group and including the new Airborne Surveillance and Control capability provided by the Crowsnest helicopter, hitherto of 849 NAS.

The new Commanding Officer of 820 NAS Cdr Ian Varley was himself a former pilot in 849, and for the remainder of 2020 all eyes were firmly focussed on the inaugural operational deployment of the Maritime Task Group in spring 2021to be led by HMS Queen Elizabeth. Despite the challenges of the Covid-19 virus, it was a busy year and in the autumn they embarked in Queen Elizabeth for the second time to take part in the largest led Task Group exercise for some years, and in December the RN Carrier Strike Reactive Task Force formally won its operational spurs.

As the Task Group deployment approaches 820 remains at high tempo, preparing aircraft, refining tactical skills in the simulator and making sure everything is ready for formal acceptance of the new Airborne Surveillance and Control (ASaC) Merlin Mk2s alongside the Anti-Submarine variant. All their helicopters and most of their personnel will embark for the 7 month deployment, joining and US Lightning jets (Harrier replacements), RN Wildcat (Maritime Attack) and “Junglie” (Commando) Merlin helicopters.

Sadly, the restrictions of Covid have meant we have yet to meet 820 at home in person, having had to cancel all our London activities, and it is unlikely we will now be able to visit them at their base in RNAS Culdrose in Cornwall before they deploy. We look forward to making this happen just as soon as we can, and in particular to being able to present them with the ceremonial pennant which was embroidered in fine needlework by Fine Cell Work.

The Royal Irish Regiment is an infantry regiment comprising two battalions. The 1st Battalion is a Regular Army battalion based at Ternhill in Shropshire. The 2nd Battalion is a Reserve battalion based in several locations across Northern Ireland. The Regiment, which was formed in 1992 from the Royal Irish Rangers and Ulster Defence Regiment, traces its lineage from a several famous antecedent regiments including the 27th (Inniskilling), 83rd (Royal Ulster Rifles) and 87th (Royal Irish Fusiliers). The oldest, the 27th Regiment of Foot, was raised in June 1689 to fight in the Williamite War in Ireland.

The motto of the regiment is Faugh A Ballagh, derived from the Irish Gaelic phrase for "Clear the Way". This originates from the Peninsular War when Ensign Edward Keogh of the 87th Regiment let out the cry while capturing a French Imperial Eagle at the Battle of Barrosa. The Colonel of the Regiment is Maj Gen Colin Weir, DSO MBE. The Deputy Colonel is Colonel Darren Doherty, currently the Defence Attaché in Dublin and who attended the Associated Companies Dinner in 2019. The Regiment draws a significant number of recruits from the Republic of Ireland as well as the United Kingdom and Commonwealth.

The 1st Battalion returned from Kabul in November 2019, where it had been deployed on Op TORAL since May. Twelve members of the Battalion received United States Army Achievement medals for their work in support of the Police Institutional Advisory Mission. The Battalion conducted homecoming parades through Market Drayton on 3rd December near their barracks and in Newtownards, Northern Ireland, on 14th December, which is their principal recruiting area.

In the autumn of 2019 the 2nd Battalion successfully conducted training at Sennybridge, Wales, which included urban operations. In October 2019, members of the Royal Irish team won a silver medal in the Cambrian Patrol Competition, which is an arduous test of leadership, self-discipline, courage, physical endurance and determination taking highly experienced teams from across the British and foreign armies. By way of example, a French Foreign Legion team, which was entered into the same competition, also achieved a silver medal. To follow up, the team engaged in mountaineering in the Mourne Mountains.

The Broderers are delighted to be affiliated with Bexley & Lewisham Sea Cadets. The Sea Cadet Corps follow the customs and traditions of the Royal Navy and aim to give young people the best possible head start in life through fun and adventurous nautical activity. The Corps’ Patron is HM The Queen.

take part in a structured training programme, both on and off the water, and are supported by volunteer role models (some from a naval background) safely to try new activities which equip them with a range of skills and self-discipline, to become confident young leaders. These skills improve their life chances, benefiting them and the wider community in which they live.

The unit has 21 staff members on strength, comprising of 9 uniformed instructors and 12 civilian instructors. Cadet numbers are strong with 42 cadets in total made up of 39 Sea Cadets (including a large junior sea cadet section) and 3 Royal Marine Cadets.

Bexley and Lewisham Sea Cadets are strongly embedded within the local community, attending high profile events including the Queen’s Golden Jubilee parade, the launch of the Commonwealth Games and a wide number of ceremonial occasions including the local Royal British Legion annual Remembrance Parade.

The Broderers are proud to note the incredible determination and leadership shown in everything the Bexley and Lewisham Cadets do. In 2014 the RMC detachment took part in a yomp across Dartmoor (following the 30-mile route of the Royal Marines Commando final Test March) and two years later took part in the Junior Brecon exercise. Our cadets are also winners, regularly competing in regional, national and international events. In 2015 they bought the Chosin Cup to Bexley, and have been regularly taking part in the International Sea Cadet Exchange. Notably, the Corps received a Captain’s Commendation in 2020.

The current Officer in Charge is CPO (SCC) Daniel Keefe, and the Chairperson is Mrs Suzanne Sweeney O.B.E, who also holds the role of Chairperson for London Area Sea Cadets.