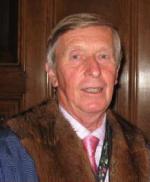 Eulogy to Past Master Charles Gotto

I never ever contemplated having to give an address like this in such circumstances.
It is, quite frankly, difficult to comprehend that someone so full of life and purpose should have been taken from us in such a sudden, tragic and unexpected way.

Our beloved Master Charles Gotto was one of the kindest and most compassionate of people I have ever had the privilege of knowing and there is no doubt that all of us in this Company have lost the truest of friends.
For my own part, I had known Charles since I was a small boy through the mutual friendship of our respective parents:-

Our fathers, fellow Broderers, were of course Old Dauntseans, as indeed were Charles and I (neither of us, it has to be admitted, particularly shining academically!).
There have been a number of other common threads too – for example – we were both born in Wimbledon!

But above all else we have, over a great many years, both been committed Broderers – a special honour which all of us in this room share.

Charles was someone for whom everyone in the Broderers (and elsewhere) had such a high regard and when, due to unforeseen circumstances, it became necessary for a Past Master to step into the breach and serve a second term, not only was Charles the obvious choice, but in spite of his numerous other commitments, he manfully agreed to take up the challenge and with the greatest of skill, diplomacy and tact has led us to the point today where the Broderers have, after a decade or more of debate, agreed to admit Ladies to the Livery – a lasting legacy to the Company which Charles had, over a great many years, served with such passion and distinction.

But let me turn to Charles Gotto, the individual, outside the Worshipful Company of Broderers:-
The first ten years of his working life were spent in the employment of a firm of meat wholesalers in Smithfield Market when much of his time was engaged in the procurement of home-killed lamb, pork and beef from abattoirs throughout the UK – he was not a vegetarian!

Having demonstrated his personal initiative in starting a catering division within the company, Charles then left and created his own catering business which encompassed the hospitality industry including the founding and management of a Golf and Country Club.

In 1982 Charles married Linda and together they ran a highly successful chain of public houses and restaurants in South West London – most notably “The Ship” in Wandsworth, with a beautifully restored Thames wherry named “Convoy” anchored outside as an added attraction. Indeed, Charles was a longstanding Craft Owning Freeman of the Company of Watermen and Lightermen of the River Thames.

Charles was not only an “achiever“ but he was also very much a “contributor” – not only by way of extreme personal generosity but also in his kindness and courtesy allied to a deep and enduring passion for those subjects that interested him.

His placid exterior belied the quietly dynamic and energetic man beneath – after all, how many people in this day and age would even contemplate, let alone have the drive and determination, in their mid-50s, to embark upon a new career in farming! And yet that is precisely what Charles did in 1995 when he purchased Home Farm in Dorking in order to realise his dream of becoming a farmer and fulfil his passion for producing the finest meat from the farm to the table.

To this end, having sold out their interest in their chain of South London public houses and restaurants, Charles and Linda in 2005 purchased “The Parrot” in Forest Green which soon began to win numerous accolades for the high quality of its meals and its meat dishes in particular!

Naturally enough, the story did not end there because the opening of a farm shop and butchery soon followed as did the employment of Linda and Charles’s family in the whole enterprise!

Charles was, above all else, a wonderful “family man” in the truest sense: the large round table in their big farm kitchen, with Charles sitting at it, was the hub of the family’s life and little of note was decided anywhere else.

In describing this perspective of Charles, I have been greatly assisted by the words of fellow Liveryman Harry Williamson whose particularly close friendship with the Gotto family goes back some 47 years. As Harry has recounted, Charles was absolutely reliable in the staunchness of his many and varied long-term friendships, and he never bore any hard feelings or grudges, but rather a calm and equable reaction and response to almost anything that was thrown at him. His great ability was to be able to turn ideas and ambition into reality.

Charles certainly made his mark on the Broderers’ Livery; he instigated suppers and events to encourage Liverymen to re-evaluate their membership and their commitment to the Company. His contribution to the Broderers’ Company over almost four decades has been quite simply outstanding; his enthusiasm, dedication and generosity to the Company were unique and throughout his second period as Master from June 2009 to the date of his death on 9th May this year he had been actively engaged in rekindling the Company’s interest in its Craft and encouraging renewed discussion and enthusiasm within the Livery for Embroidery.

He was President of the Embroiderers’ Guild from 1992-2002 and at Harry Williamson’s request resumed that Presidency in 2009.

Charles’s approach to his family, friends and colleagues was one of “inclusivity” and it was for that reason that he was so determined to give ample opportunity to the entire Livery (not just the Court) to be involved in the irrevocable decision to admit Ladies to the Company.

Indeed, it was, I am sure, that sense of all-pervading “inclusivity” that endeared him to so many and caused him to be so well liked. Put quite simply, he had a happy knack of being able to carry people with him even when it was sometimes difficult for them to agree to do so.

As the Master’s song says, he was indeed a “plain dealing fellow who never from honesty shrank”.

Charles Gotto was a highly principled and courageous man who led by example.

He leaves behind him a widow Linda, four children – Vicki, Emma, Lucinda and Oliver plus two grandchildren, Daisy and Charlie.

He also leaves behind a family of Broderers.

Charles’s son Ollie and his son-in-law Aaron have both been clothed in the Livery here this evening and I know that this is what Charles, who proposed them, would have wanted. Life does and must go on and the courage demonstrated by Ollie and Aaron in being here tonight leaves me in no doubt that in spite of their dreadful loss the Gottos will continue to thrive and prosper in the years to come.

The loss of loved ones is always hard to bear and leaves one inside a lonely vacuum which is so difficult to fill. Yet time is a great healer and gradually that great void of sadness will be filled with all the happy memoires of those many occasions which Charles was able to share with so many people for so long; and in this way he will live on in those of us who remain behind and whose lives he touched.

Charles set the “Ship” well on its course. He did all the difficult bits and charted the waters but he has left it to others to finish the journey.

My congratulations go to our new Master, Dr Paul Woolley, on his election – the helm is now yours!