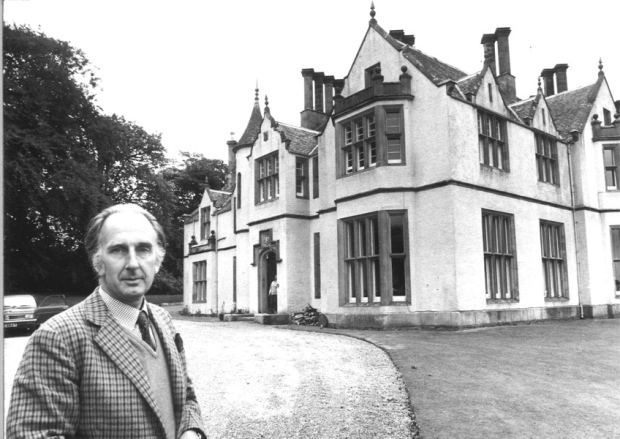 The Buchan’s family history and its connections with Auchmacoy in Aberdeenshire go back to the 15th century. David Buchan was proud of the associations his family had with Scottish history and, although he spent many years in the south, he was an avid supporter of the clan and a defiantly loyal Scot. Those qualities were seen in 1997 when he honoured his promise made to the local kirk of Logie Buchan in the 1970s. Buchan had given his word that the kirk, which had merged with nearby Ellon, “will be kept wind and watertight and maintained as a church”.

Since then, funerals, baptisms and weddings have been held, as well as an annual service organised by Buchan. It was a typical and generous act by the Laird of Auchmacoy and Clan Chief of the Buchan.

“I bought the church for sentimental reasons,” he once explained. “Around here, disused churches tend to get used as stores for things like oil or used byres. I’m blowed if I was going to have oil pipes lying on top of my ancestors or cows trampling all over them.”

Buchan had reason to be concerned about the burial sites of his ancestors as there had been Buchans interred in Aberdeenshire for generations.

David William Sinclair Trevor was born in Wales and his family had a fascinating genealogy. His mother, Lady Olivia Buchan, was the eldest daughter of the 18th Earl of Caithness. Lord Caithness, born Sinclair, took the surname of Buchan in 1911, after inheriting the Auchmacoy estate from his cousin, Louisa, 15th of Auchmacoy.

As Lord Caithness’s grandson, Buchan was officially recognised with the surname of Buchan of Auchmacoy, and as Chief of the Name of Buchan, by warrant of the Lord Lyon King of Arms in 1949.

Buchan attended Eton College and then graduated from the Royal Military Academy, Sandhurst. He had it in mind to take a commission with the Welsh Guards until his grandfather stressed the family’s Scottish connections. In fact, his grandfather laid down some conditions: that Trevor should change his name to Buchan and that he became a regular soldier in the Gordon Highlanders.

Buchan was commissioned into the Gordon Highlanders and initially served with the army in Berlin. Between 1953 and 1955 he was aide-de-camp to the General-Officer-Commanding British forces in Singapore. He retired from the military in 1955, with the rank of Captain.

While he pursued a successful career in the City of London as a stockbroker, becoming senior partner of the firm of Gow and Parsons, Buchan became an increasing presence in Aberdeenshire – serving on various charity and public bodies. He retired from the City in 1972 and devoted much of his time and energies to his estate.

Buchan had decided that, despite much of the land from the family estate being tenanted, he oversaw matters in Aberdeenshire with keen care and attention. He brought in a cousin who had studied agriculture to manage the estate and he gradually invested in nearby land and bought more as farmers sold their land. Over a decade the estate expanded considerably and the return on the farm became much enhanced.

Buchan also greatly improved the sporting side of the estate and it now offers first-class game and shooting facilities, including pheasant and partridge shooting along with roe deer stalking. He landscaped the gardens and the daffodils, in particular, in the spring are spectacular.

His commitment to the clan was no less enthusiastic and it flourished under his stewardship. In the 1960s the Buchans in Peterhead and Fraserburgh suggested to their chief that they should have a clan of their own and not be a sept of the Comyns. He championed their cause and successfully put forward a detailed case to the Lord Lyon King of Arms. As clan chief he proudly signed the clan’s Association and Constitution in 1971.

The clan now has a presence in America and was splendidly represented by his son Charles Buchan at the Gathering in Edinburgh in 2009. As clan chief Buchan was a member of the Standing Committee of Scottish Chiefs.

Buchan, who was an accomplished bridge player, was a member of the Royal Company of Archers, an officer of St John of Jerusalem, the Friends of Malta GC, the Royal School of Neddlework and served as the vice-president of Aberdeenshire County Council. He was also president of the Ellon Cricket Club.

Susan and their three sons and a daughter survive him.