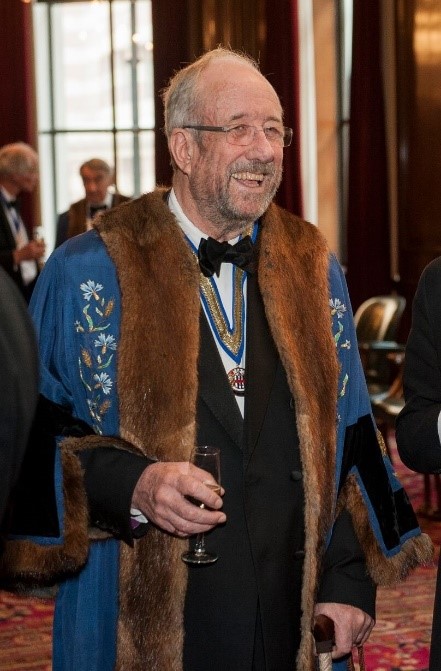 Warden Peter James Crosby Crouch, 68, of Betchworth, Surrey, died 17 March 2018 with his wife, Jackie, by his side two months before the election which, undoubtedly, would have seen him progress to Master.

Peter was born to William James Crouch and the late Vera Joan Crouch in Hampshire on 26 December 1949 and educated at Churcher’s College, qualifying as a Chartered Accountant in 1976. Peter ran an accountancy firm, Newby Crouch, from 1977 – 2017 before semi-retiring and setting up a new firm, JCA, Chartered Accountants, with his wife, Jackie, who had worked with Peter at Newby Crouch since 1987.

Whilst Peter enjoyed life as a Chartered Accountant his main interest was history, especially the history of City Livery Companies. In 1989 Peter became the Clerk of the Worshipful Company of Broderers, a role which he enjoyed up until his retirement in May 2017 due to his imminent progression to Master Broderer in May 2018.

Peter was also Clerk to the Worshipful Company of Wheelwrights for 10 years and acted as accountant to 8 other Livery Companies.

Peter will also be remembered for his generosity to charity: he was continuously sponsoring local charities, especially The Grange in Great Bookham, for whom he was a Trustee for 7 years.

Peter is survived by three children: Andrew, Jonathan and Hannah and by granddaughter Lyra.

A memorial service will be held at Mercers’ Hall at 4pm on Wednesday 16 May 2018, those wishing to attend should please notify the Clerk at clerk@broderers.co.uk.