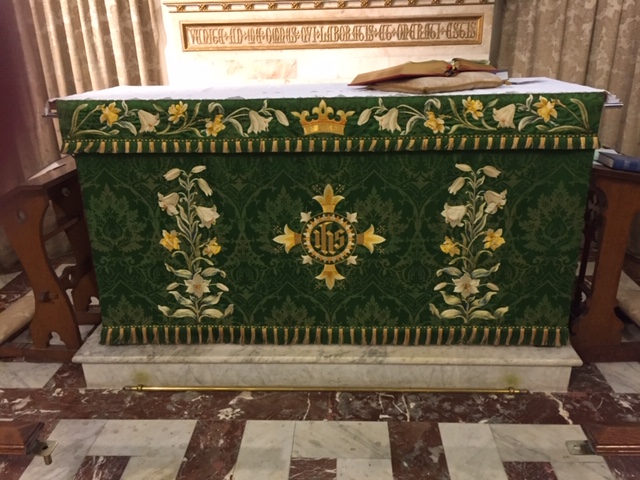 I was able to attend yesterday the rededication of the Altar Cloth at the above Church. It had recently returned from repair and conservation at the Royal School of Needlework, this work having been 50% funded by the Broderers Company.

I was very well received by the Reverend Amanda Beck, her colleagues and indeed many of the congregation. There were numerous expressions of gratitude and appreciation, sincerely meant. I understood that they approached us, having already raised £1,500 out of the £3,000 needed, and that we agreed to match fund their efforts. Their view accordingly is that we made it possible for the work to proceed, and they were unstintingly generous with their expressions of appreciation of this.

In response to a request from Amanda Beck I gave a short address as part of the Service in which I was able to describe the part played by Livery Companies in the field of charity, together with a brief outline of the Broderers.

The Church is particularly well appointed, having benefited in the late 19th Century from the patronage of Princess Mary Adelaide, Duchess of Teck, who lived at the time in White Lodge, Richmond Park, and who worshipped at the Church. There is wonderful stonework, and also carvings and stained glass windows, so the restored altar cloth has plenty of competition. It is in fact quite magnificent, and more than holds its own in this particularly beautiful Church. See photograph.

I left with the conviction that this donation was money very well spent. It could scarcely have been more appreciated.