Nick Bagshawe and I visited Fine Cell Work to find out their latest news.  It was my first visit and I took the opportunity to ask lots of questions!

Fine Cell Work operates in 32 different prisons with over 500 stitchers in total with approx 300 stitching at any one time.  Most stitchers see a volunteer on a regular basis to help them develop their individual skills.

The process to create a finished article starts life as a kit, prepared in one of the two prison workshops in Cambridgeshire and Leicestershire.  The kit is sent to FCW’s hub at Battersea where it is stored until needed.  Staff at the hub use sales data and their own detailed knowledge of the stitchers to send out kits for stitching, which they carry out in-cell.  Once completed, the items are returned to the hub, or sent back to one of the prison workshops for making up into the finished article.  Of the sale price, about a third is paid to the stitcher, a third covers the cost of the materials and making up and a third makes a contribution to FCW funds to be used across all their activities.

FCW have been promoting commissions – that is individual, very specific orders.  In 2016 the UK Antarctic Heritage Trust commissioned 500 Gentoo penguins for sale in Britain’s most southerly post office – a highlight for cruise ships.  They were such a hit that earlier this year a further waddle of 300 penguins (yes, that really is the collective noun for a group of penguins on land) was sent to Antarctica.  What a lovely thought that some of the stitchers work has a home all over the world!

Despite all this effort, sales of finished articles only account for a third of FCW’s income – through pop up shops, the FCW website and events.  The rest is raised from donations and applications to various bodies for awards and grants.

The latest initiative – funded by a National Lottery award of almost £500,000 over three years is called Open the Gate.  Helping prisoners in jail only goes so far and FCW wanted to help prisoners as they are released – usually on Licence.  One year on, the Lottery award has allowed FCW to support 25 prisoners so far to develop additional skills such as making up (a straight line of top stitching may look simple – you just try it!) as well as understand the challenge of a regular working life and for some, the early lessons of a commercial world.

The enthusiasm of the FCW team is infectious.  I know that some Broderers have previously bought cushions and even commissioned work.  For any who have not, take the time to look at the FCW website – and remember, Christmas is not that far away!!!. 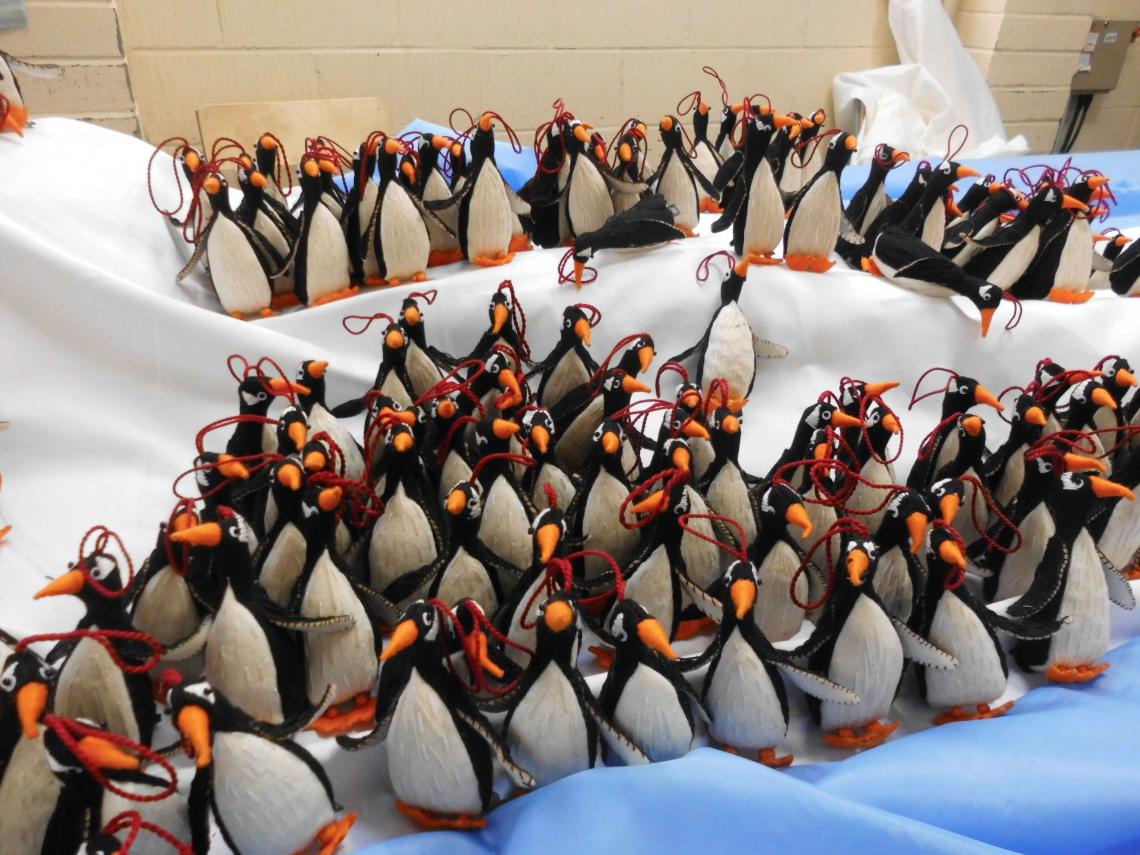 The Gentoo Penguins on their way home