Broderers may remember that the four Associated Companies club together every year and undertake a joint project, with each Company taking a turn to nominate a project of their choosing. In 2021 the Broderers worked with the Museum of London to identify 17th century textiles that required some conservation ahead of display at the new West Smithfield museum site. Opening of the new Smithfield site has been deferred until 2025 – which is handy as the conservation work has not been completed!

The Broderers Charity Trustees were invited to inspect the conservation work completed to date. Hazel Forsyth, Senior Curator, Medieval and Early Modern led our visit and we were joined by two ladies – Emily and Anne-Marie from the conservation team.

Hazel explained the projected design and layout plans for the “London Life” gallery. This has received a significant donation from the Goldsmiths Company. The displays with be based around three “expanded moments”: a Roman house and shop; the Great Fire of London and Votes for Women.

The artefacts supported by the donation from the Associated Companies will be included within the ‘Great Fire of London’ theme.

We were shown the completed conservation work on the Gentleman’s Cloak. The photos highlight the character of both gold and silver work. The sheer quantity of gold and silver embroidery makes the cloak exceptionally heavy – and MoL have concerns as to how the weight of the cloak can be supported and at the same time, prevent the cloak from falling into creases. The photo shows the intended approach – the left side shows the effect of a moulded support to a toile, while the right side shows the toile with no support. 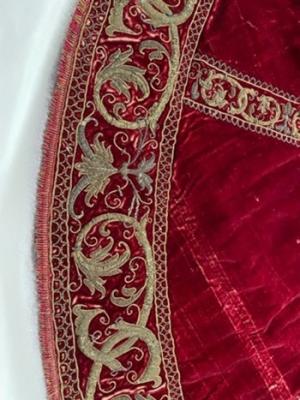 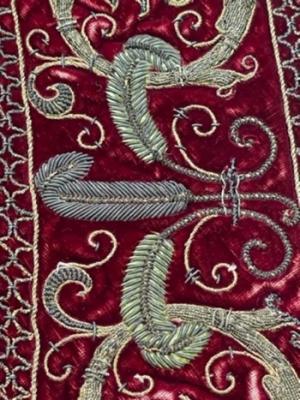 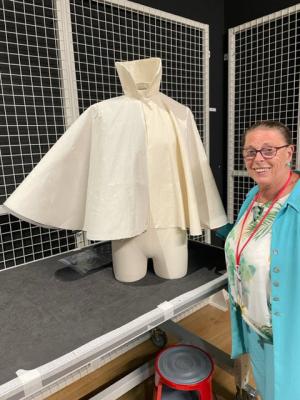 Previous 20th century conservation work included the addition of a tie, to hold the cloak together – complete with a modern wooden toggle!!

Conservation of the stumpwork box has yet to be started. The lid is in remarkably good condition, although the silver thread embroidery which forms the narrow border shows some wear and tear. The side panels are in not quite such good condition – as the owner would have picked up the box with (grubby and/or greasy?) hands on either side. 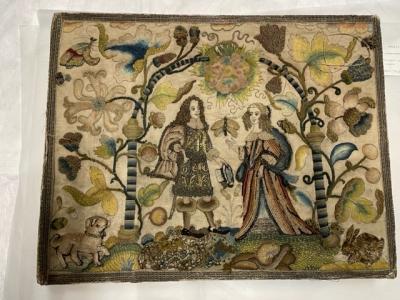 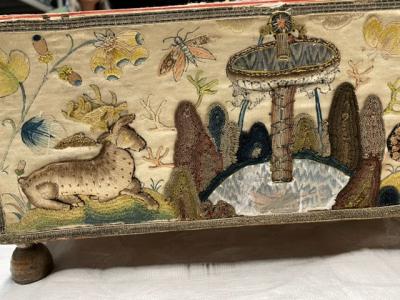 We were also shown two panels that were probably created with the intention of being made into a similar box, as above – but never got that far. As a result, they in excellent condition. Red and blue are the least stable dye colours but in these two pieces, they remain incredibly vibrant despite being almost 400 years old. Note though, the significant difference in stitch technique between the two boxes with the unmade box panels using minimal couching to create the appearance of ‘flowing fabric’. 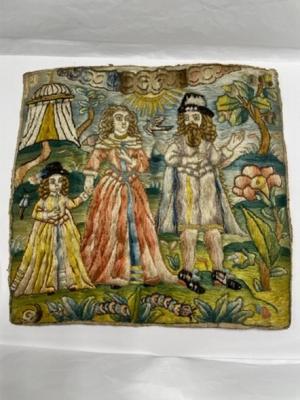 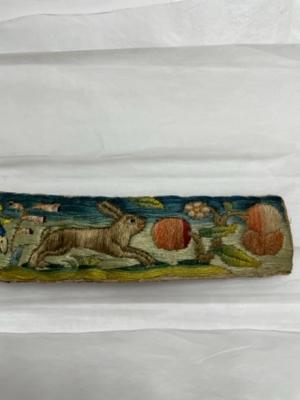 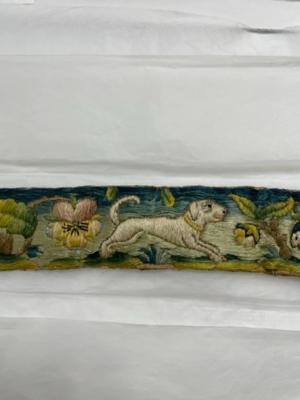 Work on the Hanging has started. During earlier conservation (probably in the 1980’s) a backing was applied and effectively quilted to the hanging to try and provide stability. There are a number of holes in the fabric where both the warp and the weft have been eroded. Very small pieces of viyella of a similar colour were inserted behind the holes. Viyella is wool and cotton blend while the hanging is made with a linen warp and a cotton twill (a weave technique that is characterised by a diagonal appearance). The two textiles have not lived well with each other, and the conservation intends to remove as many of these pieces as possible without being invasive or destructive.

The Hanging embroidery is produced in red wool – an unusual colour as black is a more usual colour choice. The range of stitches is very limited with density of stitch used to create the effect of shading. The borders face all four directions while the central panel has a single direction. The top side is in the worst condition in terms of textile condition and embroidery. The purpose of the textile is not clear – it might have been for a tester as there are two family coats of arms as well as various Bible characters and the Arms of the City of London and the Merchant Taylors. God and Mammon covers all angles!! 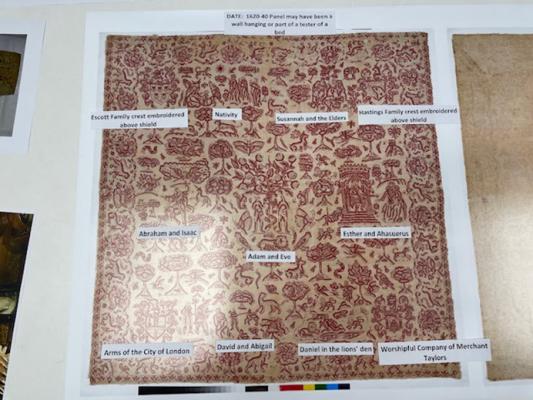 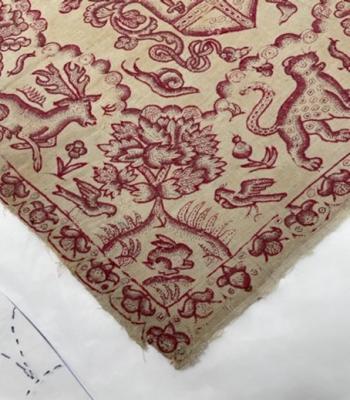 The London Wall site closes at the end of this year. One gallery has already been converted into a storage area for those items that have been assessed as ready for display at the new Smithfield site. Trustees hope to be able arrange a further visit to inspect the other items that have been selected for conservation, funded by the Associated Companies donation.

The Museum staff were at great pains to recognise their appreciation for the donation.