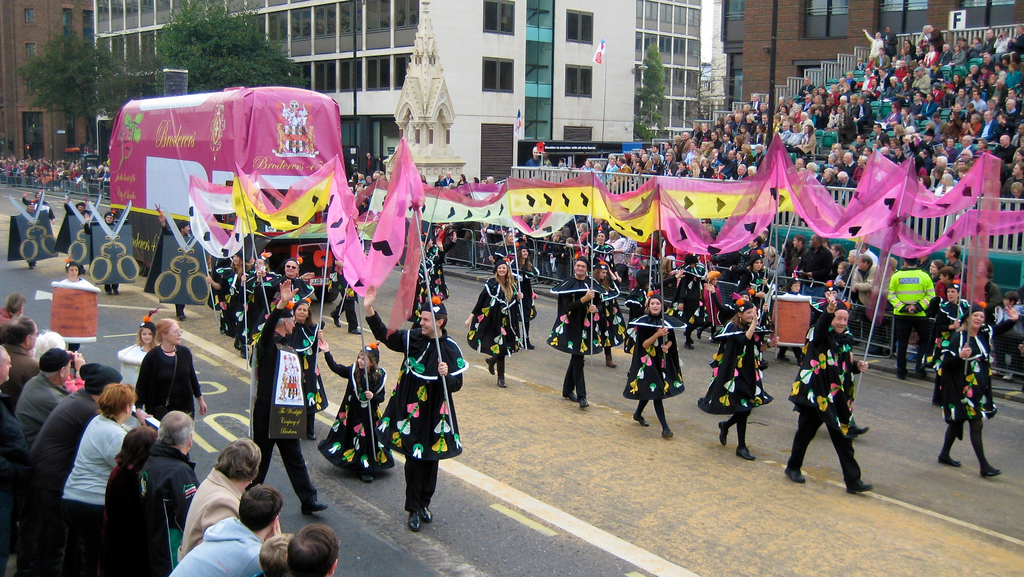 The Broderers have risen to a new height on the richter scale with their superb float adorning the 2011 Lord Mayor's Show.

Liverymen in considerable numbers and of all shapes and sizes signed up to be part of the Broderers contribution to the 450th celebrations by entering into the Lord Mayor's Show - all masquerading as ribbons carriers, cotton reels & scissors. It was the most tremendous sight as the giant London Bus dressed quite superbly as the largest sewing machine in the world was driven by Past Master Nicholas Charrington through the hallowed streets of the City of London to be watched by an enormous and enthusiastic crowd. Colour, laughter, happiness and joy cascaded around the sewing machine as all Broderers bathed in the reflection of what was the best float in the whole show.

A huge amount of time and effort was invested by the Charringtons in order for those who took part to enjoy it all. I for one was much humbled by the sheer scale of investment made Nick and his family. From the costumes (with accompanying carefully inscribed instructions) to the bus (and its new beautiful Broderers skin), to the brightly coloured ribbons, to the beautifully painted scissors, to the reels, to the tea, to the cakes and champagne and of course to sponsorship too.

It was a mammoth contribution to the common cause of us all. It was a tremendous day. Nothing short of a herculean effort made by the Charringtons and Nick himself. Thank you. Thank you.