Well, where does one begin after an evening like that! 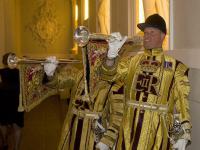 The Broderers’ 450th Anniversary Master’s Election Dinner at Mansion House on Wednesday 18 May was undoubtedly a rip-roaring success! – It will be talked about for many years to come and will live on in the minds of all those privileged to attend what was a thoroughly enjoyable and impressive “night to remember”.

This particular evening marked the formal start of the Broderers’ 450th Anniversary celebrations and in this special year only, the usual Election Day Service and Buffet was merged with what is normally an entirely separate Election Dinner. As a result, there was a considerable cost saving to those members who usually attend both events, so-much-so that all Broderers were encouraged to invite not only their wives and partners (or both!) but also relatives and friends and even business guests! The target figure was 300 seats but in the event this most prestigious of occasions was over-subscribed and the Mansion House was “full to bursting” with just under 350 attendees – and a waiting list! 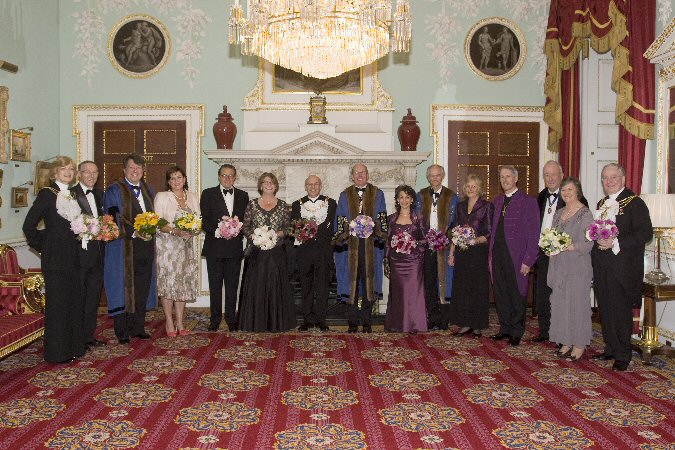 The evening’s proceedings commenced at 5.00pm with a most moving Church Service held at St Stephen Walbrook.  This was conducted by two of our very own Liverymen, The Rev Canon John Beckwith and The Rev Canon Dr Anthony Phillips, whilst the sermon was delivered by The Bishop of Southwark, The Rt Rev Christopher Chessun.  The Lessons were read by the outgoing Master Dr Paul Woolley and the Warden Lt Col Gordon Birdwood.  Meanwhile, led by the Director of Music at St Clement Danes, Peter Long, the superb choir sang the beautiful Redford anthem “Rejoice in the Lord alway”.

It was but a short walk from St Stephen to the Mansion House where the wives, partners, relatives and friends who had attended the Church Service were accommodated for refreshments in the South Drawing Room on the first floor whilst a combined Court and Livery Meeting took place in the adjacent Long Parlour.  Here, in its own unique and inimitable manner, the Livery elected Lt Col Gordon Birdwood as the new Master, Andrew Buchanan the new Warden and Peter Lumley the new Renter Warden.  Meanwhile, Lt Col Hugh Toler MBE and Nicholas Bagshawe were elected Senior and Junior Auditors respectively whilst Commander Peter Mosse and Roger Sanders OBE were welcomed as new Members of the Court.  In addition, four new Liverymen were introduced and clothed, these being Capt Victor Law KStJ, John Sunnucks, Edward Lord JP CC and Elizabeth Elvin who thus became the Broderers’ first Lady Liveryman, certainly in modern times!

The evening’s festivities commenced at 6.45pm with a Champagne Reception within the first floor salon.  Ceremonial colour was provided by representatives of the historic Company of Pikemen and Musketeers attached to the Honourable Artillery Company – by kind permission of the Lord Mayor, Alderman Michael Bear who, together with his wife, Barbara, graced us with their presence. (The Mansion House is of course their own “council house” for their year in office!).  Other civic dignitaries included the Sheriffs Alderman Fiona Woolf CBE and Richard Sermon MBE as well as the City Marshal Colonel Billy King-Harman CBE.

In addition, by kind permission of Major General W G Cubbit CBE, Major General Commanding The Household Division, there was, under the direction of Band Corporal Major Stuart Marsh, music supplied by the Orchestra of the Band of the “Blues and Royals”, who also added to the general ambiance throughout the Banquet – not least with a “Post Horn Gallop” and a stupendous solo performance on the xylophone.

Naturally enough, the Banquet itself was held in the fabulous Egyptian Hall with the Master, Lord Mayor and principal guests being announced by means of an impressive fanfare provided by two Royal State Trumpeters. 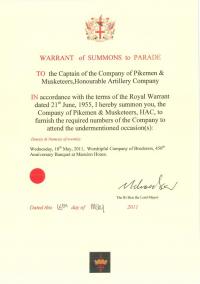 In addition to the principal guests, other attendees included amongst the gathering were The Viscount and Viscountess Hood and two former Lord Mayors of the City of London, Sir Christopher Lever Bt and Sir Brian Jenkins GBE, together with their respective wives Lady Lever and Lady Jenkins.

Three Past Masters who had attended the 400th Anniversary celebrations fifty years earlier were also in attendance, namely the Broderers’ Senior Past Master Timothy Wilkin along with Christopher Hall and Jim Tearle.  Furthermore, the Company also welcomed in its midst the widows of four former Past Masters namely Lady Slynn of Hadley, Mrs Margaret Paddick, Mrs Kirsty Wheeler and Mrs Linda Gotto along with Mrs Jean Randall, the widow of a former Liveryman.

Although a non-fundraising event in itself, nevertheless, also invited were representatives of the Broderers’ four principal charities i.e. The Royal School of Needlework, The Embroiderers’ Guild, The Grange Centre and Fine Cell Work, along with our specially chosen charity for the year “City Gateway”. Copies of the 450 Countdown Campaign Pledge Card were also liberally distributed with the menu cards just in case anyone who is minded to contribute (and has not yet done so) needs that final “nudge” to do so!

The Banquet itself was tremendous and was provided by the preferred Mansion House caterers, CH&Co Catering Limited whose General Catering Manager, Peter Martin, presided whilst the food itself was prepared by Head Chef Kamwar Singh and his team. Up front assistance was provided by the Keeper of the Mansion House, Wayne Garrigan, whose advice and guidance both with the forward planning and on the night itself were quite simply invaluable. 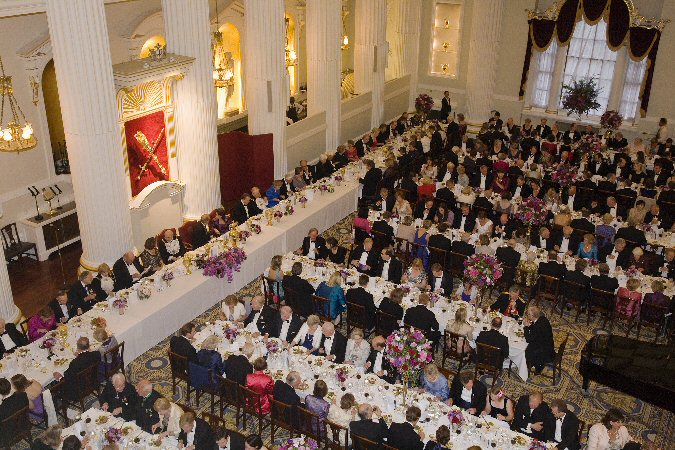 The first course consisted of Home Cured Scottish Loch Salmon with Morecambe Shrimps, Tomato and Avocado Tartare (washed down with a superb Mâcon-Solutré-Pouilly 2010).  The second course comprised Roast Rump of Cornish Lamb with an additional Slow Cooked Shoulder Hot Pot and “Navarin” of Seasonal Vegetables (accompanied by copious amounts of Château Lassalle 2000); and to conclude there was a beautifully presented Trio of Chocolate (accompanied by a plentiful supply of Château Grange Neuve 2005 Monbazillac) followed by Coffee, Port and Handmade Chocolates! (NB All of the wines were personally selected by the Broderers’ Wine Committee in the form of Past Master Derek Smedley MW).

As was so succinctly observed by 450 Committee Member Roger Sanders OBE in his recent email to the Livery:-

“Our 450th Anniversary Year is now underway, with a truly memorable Election Dinner at the Mansion House.  This was attended by an incredible 348 Liverymen and guests and was completely sold out, with a waiting list.  76 of our 130 Liverymen and Freemen were there – a 59% attendance rate.  Our new Master, who had obviously been taking singing lessons, gave an appropriate rendition of the Master’s Song as befitted a former Cavalry Officer, in that the first verse was taken at a walking pace, the second at a trot, the third at a canter and the final one at a gallop!” 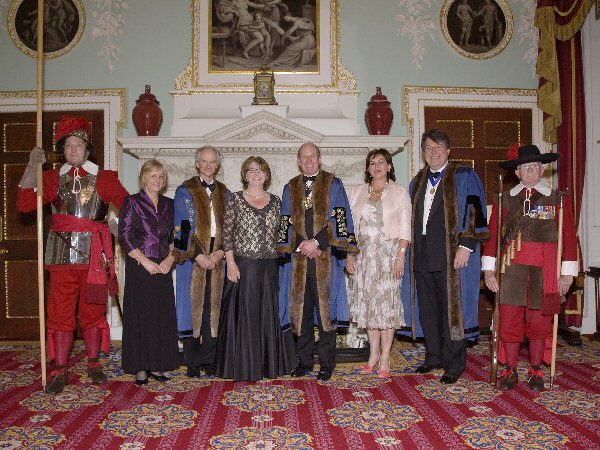 The general announcements on the night were managed “up front” by the Beadle, Richard Kennell who, with great aplomb, ensured that everyone and everything was properly introduced at the appropriate time!

Meanwhile, Liveryman Aaron Perks deserves massive praise for his having completed so satisfactorily the arduous task of getting all the printing of tickets, table plans etc. undertaken so expeditiously within very demanding time constraints.

In the meantime, it is perhaps also worthy of note that at no cost to the Company, the fantastic flowers on display were produced by the florist Emma Appiah whose website is www.emmafloraldesigns.com, for those who may wish to use her services in the future. Either way, it would be greatly appreciated if anyone minded to do so would log some favourable comments on Emma’s website to help her promote her business!

As to those of you who were captured on film by representatives of Gerald Sharp Photography and may wish to retain a permanent visual record of your presence on this highly auspicious occasion, you may wish to trawl through the latter’s website www.sharpphoto.co.uk/online and place your orders accordingly (at a price!).

Last but not least (and on the basis that “the last shall be first!), I wish to place firmly on record the enormous debt of gratitude that the Broderers owe to the Clerk, Peter Crouch and his assistant, Jane Bishop, who did so much to make the entire evening such a fantastic success! I do not think it is easily appreciated just how unbelievably difficult it was (both emotionally and practically) for Peter and Jane, at such comparatively short notice, to pick up the threads after the unexpected demise of dearest Lyndsay Lowe who we all miss terribly. But there can be no doubt that Peter and Jane both rose to the occasion brilliantly. Their amazing efforts and organisational skills accounted for a good 90% of the work (not to mention 90% of the worry!) and it is difficult to put into words just how much these stalwarts of the Company are valued by all concerned.