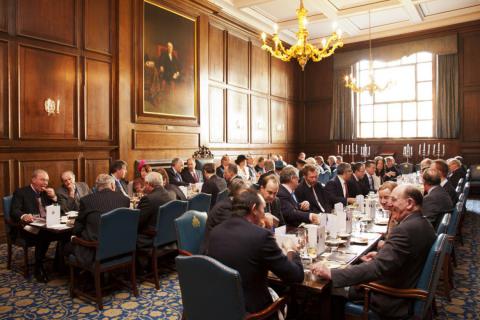 This was to be held by kind permission in the Innholders Hall. HRH The Earl of Wessex was our principle guest and the day started by a short rededication service at St Michael Paternoster Royal which was followed by a Reception where HRH met the entire Livery before unveiling the magnificent 450th Artefact.

This work of art - in the form of a beautifully embroidered Lecturn Fall - was commissioned by the Livery and funded entirely by Liveryman Harry Williamson in memory of Past Master Charles Gotto. The work for this magnificent piece of embroidery was done by the Royal School of Needlework. We had representatives from the Royal School of Needlework who were involved in the making of the Lectern Fall and this was followed by an exceptionally enjoyable luncheon which was really basically a family Livery affair.

The Livery are very grateful for the generosity of Livery Harry Williamson and the support given by Phillipa Turnbull in the idea, concept and delivery of this wonderful possession.