One of the unique features of The Broderers is The Master's Song. Christopher Holford in A Chat about The Broderers'Company wrote “The reception given to the Broderers' song is very unlikely that given most other songs that have been badly executed, for the more out of tune The Master is - and perhaps he has never attempted to sing before - the greater delight of the audience”. This was written in 1910. How true is it of today? Most Masters view the singing of the song with some trepidation and the Livery with anticipation. Consequently, it is worth examining the song's origin.

Past Master Percy Levy in Plain Dealing Fellows reports that it is “unlikely to be more than 150 years old”. Christopher Holford, in going through the Minutes from 1679, could find no mention of it. Indeed the earliest record would appear to be a letter written in 1856 to a contemporary journal signed by one “Middle Temple Gate” in which he writes; “I am induced therefore to renew the subject, and submit the following song, which I recently heard sung at a Court dinner of the Broderers' Company which is styled ‘The Broderers' Song', it is sung or said by the Master of the Company at every Court dinner. It appears that this custom has now prevailed in the Company for above 100 years and has always been punctually observed”.

This, in itself, does not date the song and Christopher Holford further tries to date it with reference to two Minutes; the first being in 1836 in which Mr Burra (possibly the Master and later the Clerk) was thanked for inviting some professional singers to a dinner; and the second is in 1838 in which the Master “directed that a Piano forte should be hired for the entertainment of the Company”. These minutes suggest musical entertainment at that time was something new.

Oh! give us your plain dealing fellows,
Who never from honesty shrink,
Not thinking of all they shall tell us,
But telling us all that they think.

Truth from man flows like wine from a bottle,
His free-spoken heart's a full cup;
But when truth sticks halfway in the throttle
Man's worse than a bottle cork'd up.

Complaisance's a gingerbread creature,
Used for show, like a watch, by each spark,
But truth is a golden repeater
Which sets a man right in the dark.

Half-words, shrugs and nods - a deceiver -
The cunning man's art to seem wise,
But, trust me, plain-dealers will ever
Such paltry practice despise. 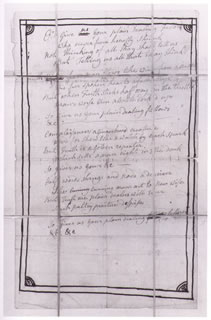 Past Master Christopher Holford ascribes the song as probably having been written by one Jacob Cole, a comic songwriter and, curiously, also a hatter. In 1863 it was minuted; “That a sum not exceeding £21 be given for a testimonial to Mr Jacob Cole as a memorial of many agreeable hours passed in his society”. Jacob Cole was subsequently presented with a clock inscribed; “As a mark of their esteem and respect”. To give such a present for just the pleasure of his company at dinners is not entirely credible. However, in the same year as the presentation he sang at a dinner a song entitled, ‘The Two Broderers'.

From the Company's Minutes it would appear that, if music played a part in dinners before the 1830s, it was unusual. In 1856 the Master's Song was being sung and had, apparently, been so for 100 years. In 1864 - eight years later - the presentation was given to Jacob Cole. The evidence is thin and conflicting. But, dare one say, the Master's Song is rather in the musical style and vernacular of the Victorian Music Hall. Also this was an era when such songs were popular. The Harrow song was written in 1864 and the Eton Boating song a year later.

“The song, which is an antique MS, is handed by the Clerk to The Master, who introduces it immediately after the usual toasts, the whole Company present joining in chorus ‘Here comes the Broderers’ song’  Air — How happy could I be with either.”

Note that in 1856 he described the song sheet as an “antique MS”.

Past Master Christopher Holford does not explore “Middle Temple Gate’s’ evidence except to ascribe the ‘Air’ to John Gay’s Beggar’s Opera written in 1728. There is indeed such an Air, but, sung at a faster tempo so as to be hardly recognisable as the tune for the Master’s song. However, a case could be made for the song to have its origins earlier in the 19th Century, or even from the 18th Century. Whatever the truth, it is lost in the Mystery of Broderers.